We imported Currante VI back in March 2011 and he was sourced for us by Tarma of Spanish Horses UK. He comes from the prestigious Can Maynou stud in Barcelona, winners of the Best Exhibitor at SICAB 2010.

Currante stands at 15.3. DNA tested EE Aa CRcr so he can produce buckskin and smokey blacks, depending on the mare's genetic makeup. He has also now been tested by UC Davis in California for the dun gene as he is producing foals with dun characteristics. He is nd1/nd2, so statistically 50% of his foals will show the primitive markings (dorsal stripe, leg and shoulder stripes)

His pedigree reads like Who's Who, with superb Bocado lines. His dam being bred by the historic Miura stud and by the Calificado (and twice Champion of Spain) stallion Panadero XIV (a son of the legendary Lebrijano III and a full brother to PanaderoVIII) sire of Olympic Silver Medal Winner Invasor II & Internationally renowned Gaucho III).

Lebrijano III, a son of Agente, is one of the most important stallions on the history of the PRE. He was bred and owned by Jose Luis Escalera. He is important for many reasons but mainly because if a horse had Lebrijano III in his paper work he was almost assured to be a top notch Dressage horse. This holds true to this day and the Lebrijano bloodline is often underwritten as a guarantee of dressage movement. Currante's dam has Lebrijano on both sides of her pedigree. No wonder Currante moves so well!

Currante's dam's maternal grandsire is the great Vinatero III  - the main stallion and founder of the renowned Escalera stud farm and bred by the Miura family. He sired countless movement winning horses, and was possibly one of the best bullfighting stallions ever produced.

He also has Maluso on both sides of his pedigree.

He has fabulous, straight movement and a wonderful temperament. He was professionally started under saddle by Esperanza Dressage and proved to be very willing and unflappable. We have high hopes for his future dressage career after gaining 64.55% in his very first test at The College, Keysoe and being placed 3rd overall. He then went on to compete at the BAPSH Breed Show in July, coming 5th in a strong 4 year old stallion class.

He commenced his stud duties in 2011 and proved to be an absolute gentleman and we were thrilled with his first foals in 2012. His stock are excelling in the showring and he has produced champions in both pure and partbred stock. His four year old son Aztec Ebano was both PRE In Hand Champion and PRE Ridden Champion at Pachesham Festival of the Iberian Horse in June 2018, against older and more experienced stallions.

He now has four graded sons standing at stud down south and another in Leics.

Currante is graded APTO  (approved for breeding) & all his stock eligible for registration.

He combines his sort after colour with top class breeding, temperament and movement. 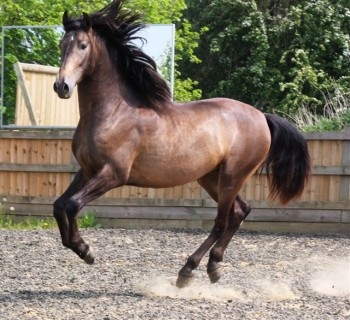 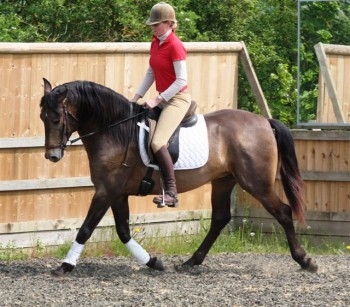 He will be available to a limited number of mares in 2020.

He covers in hand or loose, but pasture breeding is by special arrangement only and not suitable for all mares. Examples of his purebred stock: Ebano competing at BAPSH 2015 as a yearling Ebano competing at Festival of the Iberian Horse 2016

Ebano is now a graded breeding stallion and winner of the 4 year old stallions at GBPRE in 2018, including Best Movement and Best British Bred. At the Foreign Breeds Championship Show in June 2016 where he was 1st in the PRE & Lusitano class. His very first show and just a yearling .  He qualified for the Royal London where he came 5th in two large classes of adult horses, and some fabulous comments from the judges!

Examples of his partbred stock: Aventurero as a yearling winning Junior Partbred Champion at BAPSH 2015 Aventurero winning at Festival of the Iberian Horse 2016 A kinder stallion you could not wish to meet A visiting mare returned the following year with her colt foal at foot, we love this photo of Currante meeting his son for the first time And here he is meeting his son Aztec Emperador