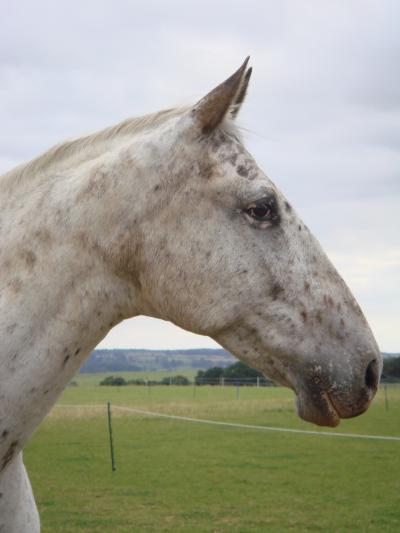 Gemma on Leo after a successful day

Up until 2009 Leo was the only Andaloosa colt we produced (out of 9 offspring!). Interestingly, he is almost 16.1, so far bigger than both his parents. This photo was taken aged 5 and he has since gone on to successfully event. His owner describes his temperament as ‘simply amazing’.

He proves that this cross not only has the looks and temperament, but also the ability to perform. Leo's full brother Rocio (Ross) joined him in 2010. So now Gemma has the only two Aztec Andaloosa boys!

Ross is the only other boy from this cross, and is also owned by Gemma. He and his brother Leo are both 16 hands plus, which is quite surprising given their parents were 15.1 1/2 & 14.3! He's also quite differently marked to all of his siblings.

On a visit to see Gemma and her boys I had the chance to ride Ross... Colorada freshly broken and airs above the ground!

One of the few leopards produced and owned by Sue & Keiron of Silverbrooke Andalusians. 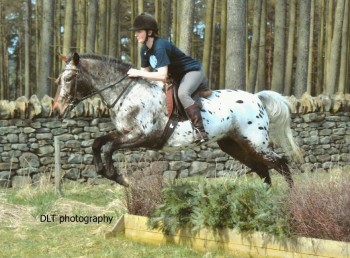 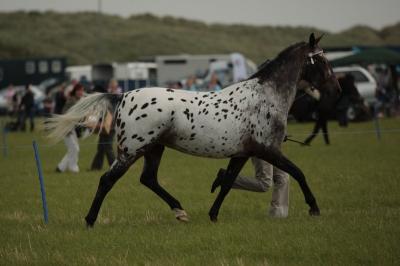 A large extended blanket, enjoying a relaxing time with her sister Zaffi. We are very pleased to say Shoshana has now come back to us and has produced our second generation Andaloosas in 2011 & 2014. Below is her 2014 colt Aztec Festivo who now lives in Ireland with two of our other Aztec offspring. He may not have inherited his mother's spots, but he more than makes up for it with his super movement and personality! The most unusual colouring, creating a lot of interest by Appaloosa geneticists.  Ella was partbred Champion at the British Appaloosa Society National Show as a yearling, and then Champion Partbred Mare at the British Assoc for the Purebred Spanish Horse Breed Show in 2013, under the extremely prestigous International Spanish judge Snr Ignazio Bravo (pictured with Caroline & Ella) As a yearling at the BApS National Show At BAPSH 2013 at Hartpury, & Champion once again Here she is in the snow in 2009 with her sister Ella. What fabulous girls! Myself & Caroline riding at Hartpury with Ella & Zaffi She was born with a small blanket which gradually roaned out totally, and here she is at 8 years old and back home with us. The only black based foal produced so far. Tia is yet another fabulous Andaloosa filly!  Tia is already shaping up to be a fantastic showing star and colouring out day by day. She lives in Ireland with her owner Mel and her other two Aztec offspring. Pinta was the last but one foal from this cross, and we were thrilled with this stunning leopard filly. She lives with Karen in Warwickshire. Interestingly, Karen is an artist and her last piece of work before coming to see Pinta was entitled 'Graffiti'! Pecosa was the very last foal from Alder Pavlova, and another stunning leopard filly again. She lives with Sue and her other spotties in Suffolk.

"A horse is like a violin. First it must be tuned, and when tuned, it must be accurately played"