As a three year old in Spain

Quitadora II is a rare perlino (double cream dilute) bred by Las Cadenas in Madrid in 2000. She was graded APTO in Spain in early 2014, gaining high marks for her exceptional movement.

She is by the Paco Marti stallion Virrey PM, (now exported to Nicaragua & by the most famous double dilute Spanish horse - Revoltoso XXIX) and her dam Latina XXXIX is by Clavijo, who I had the privilege to meet on my first visit to Las Cadenas last year. Latina is a granddaughter of the outstanding Bocado stallion Atlantico 1981 (by the great Revoltoso VIII).

She will always produce a buckskin when crossed with a bay, black or chestnut stallion.

Jointly owned by us & Sue Taylor of Silverbrooke Andalusians.

Sue and I imported 'Esta' in 2016 and we couldn't be more delighted with her. Not only is she very beautiful, but she has an amazingly kind temperament and loves attention.

Her sire, Claudio Vives, is one of only thirty stallions to be chosen by Alvaro Domecq Romero to appear in his book, Historical and Current Stallions of the Purebred Spanish Horse. Esta also appears in the list of his progeny. Both his parents are from the famous Paco Marti stud, who are well known for producing quality dilute horses.

Her dam's lines are Terry, Osborne, Military, Baones and Boloix, amongst others, and contain many famous horses of the breed.

She has already bred two foals in Spain and has produced a spectacular cremello colt for us in 2017. Although pure Cartujano, Tuna was bred from both sides of her parents to produce dressage competing stock by her well known breeder Yeguada Aimaran. Her dam Organza II is by the multi-champion Calificado GP stallion Ingenioso XX We were very excited about the addition of Bahia XXXI to the stud back in Nov 2008. She is a rare buckskin by the lovely baroque buckskin stallion, Dulzon IX and out of the black, mainly YM bred mare, Corilha

Dulzon IX was bred by the legendary Hnos Marti Verdi studfarm, and owned by one of the most prestigious PRE studfarms in Spain,  Yeguada Can Maynou (owners of Nero II, 3 times Campeon de la Raza of Spain & winners of Best Exhibitor at SICAB 2010). Dulzon?s sire is Carmelo II (Cartujano, Bohorquez, Militar) and his dam is Galera IV (Cardenas, Cartujano)

She has a delightful temperament coupled with a most incredible movement.

We have always been very interested in colour genetics so we?re looking forward to breeding with the cream gene. There are only a handful of PREs in the UK with the cream gene, and even less non-greying ones like Bahia so she is quite a rarity.

Buckskin is often incorrectly called dun. But it is actually a bay horse that carries one copy of the cream gene that dilutes the bay coat and makes a buckskin. 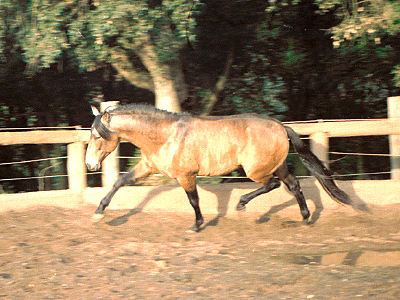 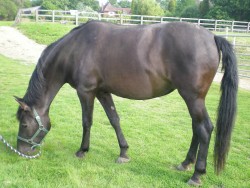 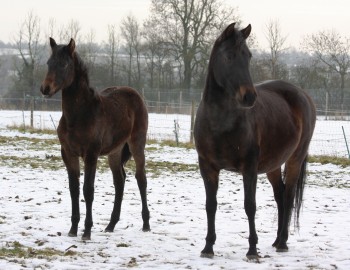 Mariquita CR is our foundation mare. Both her parents have been very successful competition horses, which is unusual as very few PRE mares compete in ridden classes. Her dam Orgullosa (see photos below) is out of Supreme National Champion Revelacion and by Euclides, a most versatile stallion with many wins including side saddle, working hunter, showjumping & dressage. Churumbel II is by the famous Hosco of the renowned Terry Stud. His grandsire is the equally famous Descarado II. Hosca, the dam of Hosco, is by Bilbaino III, one of the most important stallions in the history of the breed.

He was 3 times ridden champion in the UK with numerous dressage wins here and abroad. He is a champion classical performance horse and has undertaken film, TV & display work.  He was the winner of the 1997 Ultimado II Progeny Award. She is by the movement champion stallion Metano III.

2012 bay leopard mare who has come back to us in 2020 as a broodmare for our Spanish Spotted Saddle Horse breeding programme, after being in the same home since leaving us a weanling. Pinta was professionally started by Esperanza Dressage and has done some jumping as well as dressage competitions.

A full sister to Aztec Shoshana, we are very excited to see what she will produce for us. 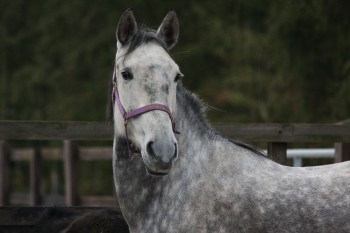 Bred by the prestigious stud of Senorio de la Bariain, Veguilla is one of only a handful of PREs in the UK tested positive for the extremely rare pearl gene.

She is a granddaughter of the famous Grand Prix stallion Gaucho III, exported to the USA and shortlisted for the Sydney dressage Olympic Team. He is well known for his big movement and was very successful in-hand in his native Spain. He won best movement at SICAB as a four year old and has many points in the ANCCE Book of Merits. He is half brother to the equally famous top dressage stallion Invasor II. Gaucho was then presented and graded Calificado at the grand old age of 17. Pavlova's sire was imported from the renowned Eagle's Nest Ranch in the USA. She is registered with The British Appaloosa Society and her foals are eligible for registration with BApS and also BAPSH. A genuine few spot mare (no grey), Pavvy has been our most prolific broodmare to date and we are so pleased to have one of her daughters back with us on breeding loan, Aztecs Shoshana.

See the Andaloosa page for details of her stunning offspring from Espiritu. This photo was taken in 2011 aged 22 years. Her sire is by the well known stallion Zero Skipkeo and her dam was an imported palomino reining mare, Jolie's Blond Baby. A stunning dark chocolate (but geneticaly black) daughter of Alder Bandit's Belle and Espiritu. Montana has been retained as a future riding and breeding mare. She has been bred to be retained as a future broodmare. 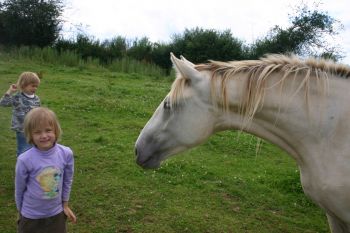 Aelis is an ultra rare silver buckskin, meaning she carries both the cream dilution and also the very rare silver dilution.

She had to be DNA tested by UC Davis in the USA in order to establish her colour genetics, as she could easily be mistaken for a champagne or a cremello/perlino.

The silver gene is probably the most exotic and unique colour gene in the equine world and is much sought after. Shoshana is our stunning homebred mare who has come back to live with us.  She has also bred two loudly marked leopard foals for her previous owner, both by an imported leopard Appaloosa stallion. We were very pleased with our addition to our Azteca breeding programme back in August 2010.

Carat as she is known, is a typical laid back QH with our favourite old bloodlines of Poco Bueno and Hollywood Gold.

On her dams side she has Docs Prescription, Doc Bar, Dry Doc & Hollywood Jac 86. On her sires side is the legendary Three Bars and world champion Peppy San.

I think I am going to have a job to prise this filly from my western-riding husband so I can breed with her!

She has been dna tested as a single champagne so statistically will pass this on 50% of the time. As neither of our boys carry the red gene, her offspring will be the even rarer amber or classic champagne colour.

After being professionally started by Arran Parker (owner of Aztec Quiza & Aztec Emperador), she produced her first foal in 2015. Topspotted Tadie joined us in 2015, to further our Andaloosa breeding programme. She is a 5 year old 15.2 fewspot Grade B Appaloosa mare, who has been tested homozygous for PATN-1. This means all her offspring from solid coloured stallions will be leopards. She has also been tested negative for PSSM1 and the grey gene, which is very important with Appaloosa breeding.

Her last foal has been sold abroad and we were absolutely delighted with her first foal by Currante in 2016. She traces back to ENRs Dutch Treat (4th generation back), who was the sire of our beloved Alder Pavlova.

Thanks to Marty at Scotia Stud for the photo.

Perla was the first cream pearl PRE to be born in the UK. We sold her as a youngster but then bought her back (in foal) in 2018.

Unfortunately she sustained an injury after we sold her and this meant she failed her grading. So her offspring, although pure Spanish, cannot be registered with ANCCE in Spain.

15.3 Grey TB mare whose offspring have excelled at jumping as well as dressage.

15.1 bay imported mare with the most extravagant movement.

Tealigh lived out her retirement years living with a friend?s herd the other end of the village. Her claim to fame was that her sire Encanto, played one of the unicorns in the Tom Cruise fantasy film ?Legend?.

Estrella produced two excellent fillies for us, before we sadly lost her after colic surgery in Dec 2008.