Horse colour genetics can be a complicated subject so I have tried to explain it in simplified terms. Its fascinating to calculate the colour possibilities of foals, but of course, quality should never be sacrificed for the sake of colour.

Theres a well know saying that a good horse is never a bad colour, yet everyone has their favourites and their dislikes, and some breeds are based entirely on colour alone.

The basics of equine coat colours are quite simple really - a horse is either black or red, with various factors affecting this basic coat colour to give a wide array of colours and patterns.

The horse has two of these basic colour genes and so will always pass one on to its offspring. If the two genes are the same the horse is known as homozygous for that gene, if they are different, the horse is heterozygous.

A gene is either recessive or dominant. Recessive means that one copy of the gene in a horse shows no expression in the coat (ie the gene is carried but hidden). Whereas if a horse has a dominant gene, it cannot be hidden and will always be expressed in the coat.

If there are no modifying factors present, a black base will be a black horse and a red base will be a chestnut horse. Black is dominant so if both the black & red genes are present, the red will be over ruled resulting in a black horse. This will be a heterozygous black that has the capability of producing a chestnut offspring when put to another chestnut or heterozygous black. Red is recessive as it takes two red genes to make a chestnut, so it will always be homozygous. Therefore two chestnuts can only ever produce chestnut offspring.

All other colours are simply a variation on these two base coats, caused by either modifying genes (grey & agouti being the most common) or dilution genes (dun, cream, champagne, silver & pearl)

Bay is often mistakenly thought of as a base colour, probably because its so common. The agouti modifier gene creates a bay from a black based horse by restricting the black to the points (lower legs, mane & tail)

Agouti only affects black base coats so a chestnut horse can carry agouti and produce a bay when put to a non-chestnut. A chestnut that carries two agouti genes can never produce a black as it will always pass on one agouti gene to its offspring, making a black become a bay, as agouti is dominant on a black.

Grey is not in fact a colour, but a modifying gene that masks the horses true colour.  Interestingly, the colour in each hair shaft is gradually pushed down and into the skin. Thus making the coat lighter as time goes on, and because the melanin is pushed into the skin, it becomes black and thicker. Grey is dominant so it will always be expressed, meaning all grey horses must have at least one grey parent. If the horse has two copies of the grey gene (homozygous), all offspring will be grey. Research has show that homozygous greys often turn to white quicker than those with a single grey gene (heterozygous).

The first signs of greying usually appear on the foals face, particularly around the eyes, giving a goggles effect. Greying foals should always be registered with their foal coat noted for future reference.

Dilution genes, by their very name, explain their effect on the horses coat.

There are currently five known dilution genes and when combined they can produce the most spectacular coat colours.

One copy of the cream gene makes a chestnut become palomino, a bay become buckskin and a black become smokey black.

Cream only affects red based horses (except in its homozygous form), so a black can look virtually unaffected, even though it is a dominant gene. But the tell tale sign can be the inner ear hair, which tends to be very pale colour in the smokey blacks and usually their body colour isnt a true jet black.

If a horse inherits cream from both parents its known as a double dilute, so a palomino becomes a cremello, a buckskin becomes a perlino & a smokey black becomes a smokey cream. I like to think of it like this; if you take a cup of coffee and add one spoon of cream it becomes lighter, add another spoon of cream and it becomes yet lighter still! This is known as the dosage effect. Double dilutes such as Quitadora should never be described as albinos. The cream genes lighten the coat, they don't remove the colour. Albinos do not exist in the horse population, or at least nothing has been found to prove that they do.

Dun is a dominant gene characterized by a clear dorsal stripe, shoulder stripes and leg barring (called primitive markings) and a lighter than normal coat. It affects both black and red bases. The head tends to be darker than the rest of the body and there may be frosting of the mane and tail (this is where lighter hairs appear at the top of the tail and the outside of the mane hairs) Buckskin is often mistakenly called dun and although the body may be of a similar colour, the primitive markings will not be present. All duns will have a dorsal stripe, but not all horses with a dorsal stripe are duns! Many non-dun foals may exhibit a dorsal stripe and primitive markings, but these usually disappear when the foal coat is shed and only occasionally remain into adulthood. This can cause confusion as to whether the horse is a dun or not, but factors such as the parents colour (one must be dun for a foal to be dun) and the breed must be taken into consideration (only certain breeds have dun in their gene pool).

If a horse inherits the dun gene from both parents it becomes homozygous, but this has no added effect on the coat, so there is no dosage effect, unlike the cream gene.

Dun on chestnut is known as red or peach dun, on bay it is bay or wolf dun, and on black its called grullo. Grullo is the rarest and most sought after of the duns, and the body colour can vary from a greyish to slate blue or chocolatey brown.

It is believed to be the oldest form of equine colour, and the original wild colour of the domestic horse. It is found in cave paintings, and in other equine species such as the donkey and the wild ass. Przewalski's Horse, the last living true wild horse,  is exclusively bay dun in colour. 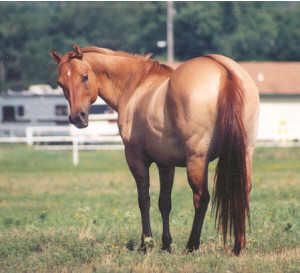 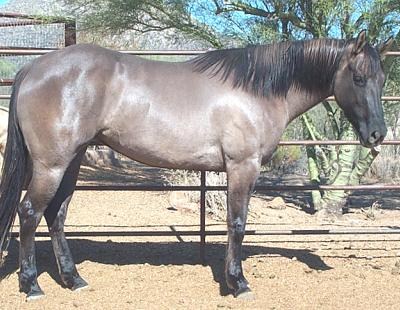 is a dominant gene found only in a handful of breeds, particularly the Quarter Horses & the other American breeds that descend from Iberians. It lightens the coat of all colours and gives it an almost iridescent sheen due to the hollow nature of the hair shaft. Foals are born with pink skin and piercing blue eyes and as they mature the skin changes to a mottled effect and the eyes turn to amber. Bay plus champagne is called amber, chestnut plus champagne is called gold and black plus champagne is known as classic. There is no dosage effect so a horse with one champagne gene will have the same appearance to one with two genes. She's often mistaken for palomino and it is hard to capture her irredescent coat in a photo.

is a newly discovered dilution found almost exclusively in Quarter Horses & Iberians. One pearl gene has no effect on the coat colour unless it is paired with a cream gene, making it an incomplete recessive. So it behaves as a recessive gene but interacts with the cream gene (if present) to then mimic a double dilute (and can easily be mistaken for a cremello or perlino), but the horse will not be homozygous. As it is cream activated, it is believed to be a mutation of the cream gene and because of this it is also believed that a cream plus pearl horse will always pass on either the pearl gene or the cream gene to their foal. Never both or none. So in effect, it acts as a homozygous cream and not as two independent genes. Two pearl genes will give an even, and very much lighter than normal, coat, mane and tail. It can easily be mistaken for champagne as it too has an iridescent sheen. 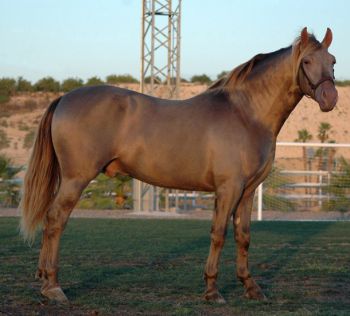 Silver is another recently discovered dilution that only affects black based horses and changes the mane & tail to a flaxen or silvery grey and can lighten the body to a chocolate colour, although the effects do seem to vary widely. The body is often dappled, giving this dilution its other name of Silver Dapple. It can often be mistaken for a very dark palomino. It can be difficult to identify without a dna test on some horses.

It isnt yet known if a homozygous silver has any additional effect on the coat.

The American Rocky Mountain Horse is almost always this colour and is extremely striking. It is a relatively rare gene in the general horse population but can be found in Welsh ponies and miniatures and occasionally in Quarter Horses and Morgans and also in what are now being termed Gypsy horses.

The two types of silver are:

A black based horse typically has a chocolate coloured body, but they can range in shade from light grey to black in colour. The mane and tail are usually a silver/flaxen colour but can also be a colour similar to the base coat, or can appear sooty. The body often has dapples. They may be mistaken for dark chestnut horses with flaxen, or even very sooty palominos. But they do have dark roots of the hair and at the lower legs, both are areas which usually appear lighter in true chestnut horses. 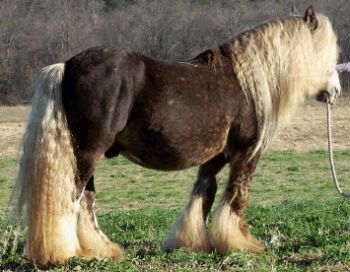 Top left is The Boss aka The Business, a black silver (dapple) gypsy cob stallion. Top right is his son, Sir Royal Excalibur.

Photos by kind permission of www.gypsyhorses.eu

A bay based horse will usually keep a standard reddish bay coat, but a dark bay horse may show dilution. The mane and tail are generally lighter, or a sooty silver. The legs are usually diluted to a brown/grey, often with mottling. Silver bays can appear to be chestnut with flaxen mane/tail as the black points are diluted to brown.

Most colours can be correctly identified based on physical appearance (phenotype) alone. However, genetic testing may be necessary to define phenotypes that are visually ambiguous.

DNA tests are available to identify the black, red and agouti (bay) genes. The cream, silver, champagne and pearl dilutes can be tested for, and grey is also a recent addition to the list. Currently, there is no direct test for dun, but UC Davis in the does offer a zygosity test, which is able to identify markers associated with dun. This test is not available for Andalusian or Lusitano horses as the dun in these breeds would appear to be very different from all other duns, with a different genetic marker that has yet to be identified.

All that is required is a sample of hairs, preferably from the tail, with the root bulb intact (as this is where the genetic material is stored).

Broken colours and spots are another interesting variable and another article to follow in due course!

"A horse gallops with his lungs, perseveres with his heart and wins with his character" (Tesio)